A ceremony was held in the Chemistry Lecture Hall at the IASBS on Monday, 17 February 2020 to commemorate the 40th day of the martyrdom of Lieutenant-General Haaj Ghaasem Soleimaani and the tragic loss of the Ukrainian airline passengers.

In this ceremony, the IASBS President, Prof Babak Karimi congratulated everyone on the “Ten Days of Dawn”, the birth anniversary of the Prophet’s daughter, Faatima (PBUH) and Women’s Day, and welcomed the distinguished Friday Prayer Leader of Zanjaan, Aayatullah Khaatami, Martyr Soleimaani’s High Assistant, General Ahmed Kareempour, and the military and civilian officials present stating that the ceremony had been convened to commemorate the martyrdom of General Soleimaani and the tragic loss of the passengers in the Ukrainian airline incident and to sympathise with the people of Iran.

After that, Aayatullah Khaatami talked about martyrdom in Shiasm and the geopolitics of the region after the General’s martyrdom. Then, Lieutenant-General Soleimaani’s comrade in arms, General Kareempour talked about some of the important aspects of the martyred General’s character including his love for the people, his sacrifices for Islam and Iran, and his dauntless courage.

Later in the programme, clips prepared by students at IASBS’s Martyr Shahriyaari Office were shown about the General of Hearts, Martyr Lieutenant-General Haaj Ghaasem Soleimaani and those who lost their lives in the Ukrainian passenger airline incident.

Here is an excerpt about martyr General Soleimaani written by Prof Babak Karimi,

“Perhaps the best description I have heard about the character of the great martyr, Ghasem Soleimaani is by him who called himself “Soldier Ghasem Soleimaani”, an adjective that perhaps formed a different meaning in our minds because of his untimely death and the unprecedented presence of people in his funeral.” 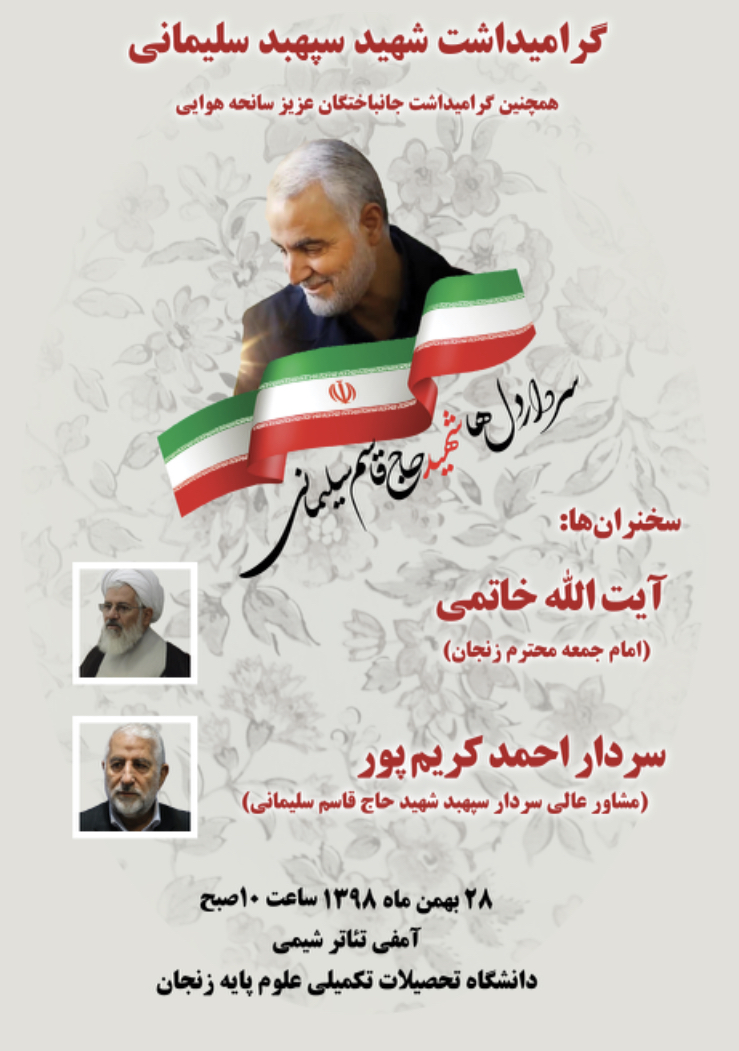